Cryptocurrency. You’ve heard of it. You know you can trade it. Yet are you still confused about what it actually is and how it works?

You are not alone.

It is important to understand prior to any investment, that investment in Cryptocurrency is highly volatile.

There are rapid growths and rapid losses. Investment should only be considered by those with a tolerance for high-risk investments.

Cryptocurrency is a type of digital token that makes use of cryptography to secure transactions and to control the creation of new units in the currency.

What is blockchain technology?

A blockchain is a distributed public digital register that contains transactional data. The blocks in the blockchain contain data such as information about a group of transactions.

Parties with access to the blockchain can enter into new transactions, such as transferring digital currency.

Bitcoin is the most popular form of Cryptocurrency that can be purchased worldwide Crypto exchangers. Users can pay in their local currency and trade with other users on the network. 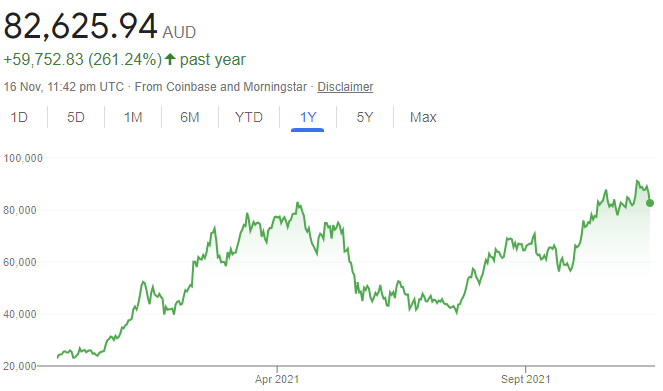 The highs and lows of Bitcoin over the last 12 months

Bitcoin is the largest and oldest form of Cryptocurrency and is considered the world’s first rules-based monetary system that is not controlled by a single entity – such as the Government.

It is a decentralised distributed database which means it is accessible to everyone. It cannot be destroyed (as it is digital), taken away without authorisation, or confiscated.

It is also now recognised as an investable asset class.

So does it fit in your portfolio?

As first noted, digital assets such as Bitcoin are extremely volatile so should only be considered if you have a high-risk tolerance. With high volatility comes high returns.

Despite Bitcoin being around for 13 years, it is still considered an early-stage investment opportunity. The future potential for Bitcoin still remains to be seen.

Keen to find out more?

If you are interested in testing the Cryptocurrency waters, speak to one of our Financial Planners to discuss your circumstances and if trading Crypto fits your investment profile.